Olympians Push the Physical Limits of Humankind, But What Limits Humans?

Olympians Push the Physical Limits of Humankind, But What Limits Humans?

To be an elite athlete, it helps to have good genes. But that’s not all it takes.

“Faster, higher, stronger” is the Olympic motto – and what every athlete at the Tokyo Games will be striving for.

But just how much a human can accomplish is determined by many factors, from genetic to psychological to environmental. Some experts even think we’ve gone about as far as we can go.

An athlete’s abilities are partly a result of the body they’re born with, said Amanda Paluch, an assistant professor in the department of kinesiology at the University of Massachusetts Amherst. Some people just have the capability to become more fit than others. “There’s always room for improvement for all individuals. It’s just the ceiling that somebody can reach is going to vary.”

Elite athletes and the general population actually differ at the cellular level, she said. Athletes’ muscles are more efficient at collecting and using oxygen.

Even among athletes, muscle composition differs. Some have muscles made up of “slow-twitch” fibers, which contract slowly and for a long time before tiring. Other muscles are “fast-twitch,” which contract quickly and tire rapidly. Put the muscles under a microscope, Paluch said, and “it looks completely different, say, between a professional weightlifter or a marathon runner.” 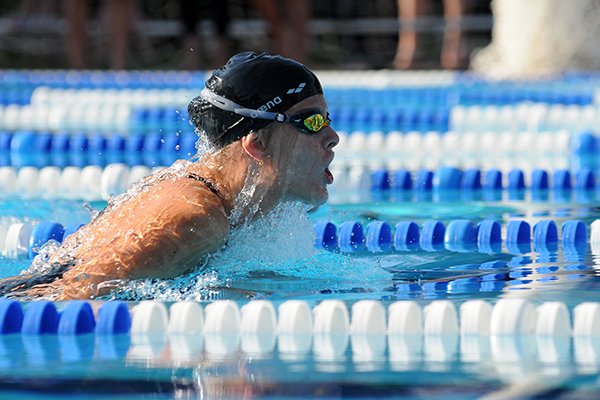 Each body has an inherent limit on its performance, said Dr. Elizabeth Dineen, an assistant professor of cardiology at the University of California Irvine. A sprinter might be great at a short distance – but couldn’t keep that pace over the course of a marathon because of the demands on energy production and oxygen uptake for that speed and distance.

That doesn’t mean everyone’s athletic fate is locked in at birth. According to the government site MedlinePlus, a person’s environment – things like support from family and coaches or having the financial resources to pursue an activity – also can influence athletic performance.

And some have the ability and the willingness to train for long hours, or do whatever else it takes, Paluch said. So, in considering the question of hard work versus good genes, “it’s definitely a combination of the two.”

Still, some researchers think humans might be nearing the physical limits of what they can accomplish. They point to the fact that improvements in performance at the top level plateaued in recent decades. (Usain Bolt’s world record in the 100-meter dash, 9.58 seconds, was set in 2009 and still stands; the women’s record of 10.49 seconds, held by Florence Griffith-Joyner, hasn’t budged since 1988.)

Dineen agrees there are limits – performance all comes down to how well a body can produce and use energy. But she doesn’t think we know enough to be able to say we’ve seen the fastest, highest or strongest of anything.

Progress is still being made in nutrition and in preventing injuries, for example, she said. And elite athletes are a motivated bunch. “Some people, with the right training and the right optimization, might be able to beat the records that we have.”

Paluch said technology plays a role. Many swimming records fell in 2008 and 2009 while polyurethane swimsuits were allowed, for example. So while we might not see humans improve much physiologically, records still might get better incrementally.

Elite athletes such as Neilson Powless hope so.

Powless is a road cyclist who competed in the Tour de France this summer for the EF Education-NIPPO team. He’s the embodiment of everything that goes into a top-level athlete.

He started with good genes: His mother was an Olympic marathoner. His father was a nationally ranked triathlete. His grandfather was a military boxing champion. His athleticism was encouraged and supported pretty much from birth.

“It would be silly to say that didn’t have an impact,” he said in May, from Andorra, where his training rides sometimes covered more than 100 miles a day, with vertical climbs of more than a mile.

Powless, who is Oneida and in 2020 became the first acknowledged Native American to race in the Tour de France, said that for riders at his level, “a massive part about it is the resources we have at our disposal.” He has trainers, nutritionists, dietitians, chefs, physiotherapists, chiropractors and more helping him succeed.

Devices track his vital functions, the amount of energy he’s generating, the amount of sleep he’s getting. On his phone, he calls the folder that holds all the related apps “Big Brother,” because so many people monitor him. It’s how he knows his resting heart rate is around 38 beats per minute. At its highest, which he might see once a year, it tops 200.

But nobody can measure his mental drive. That’s a crucial element that separates top athletes from others, and it has to come from within, Powless said.

“In cycling, I mean, if you win five races in a year, you’ve had an amazing year,” he said. That means you’re losing 75 races. You have to move past those, he said.

For him, it helps that all the hours in the saddle can be almost meditative. In fact, if he’s away from it too long, he gets antsy. “Sometimes in the offseason or something like that, after a few weeks off the bike, I really start to go a bit crazy, and I just feel like I’m craving some time on the bike or just some form of exercise.”

Which might offer a lesson for people who, unlike Powless, are not pushing the limits of human performance, Paluch said.

She’s a fan of the Olympics herself. And she said anyone can draw inspiration from them to get active and push themselves a little harder. At least 10 to 20 minutes of activity a day can provide health benefits.

“No, you’re not going to become a professional athlete,” she said. “But there’s always room for improvement.”