On the Internet and chatting with friends, you’re likely to hear stories claiming that eating a certain food or eliminating one kind of food from your diet can change your quality of life. Except in rare cases of food allergy or intolerance, there’s no concrete evidence that a simple change in diet can, say, banish chronic pain for good.

Researchers have found, however, that eating particular foods can help ease pain and that in some people, certain foods may exacerbate it. Clearly, a balanced and healthy diet full of lots of fruits and vegetables and light on animal fat (and trans fat) can help anyone live a longer, healthier life. But if you’re struggling with persistent pain, you might just be able to take your discomfort down a notch or two by experimenting with your diet.

When it comes to fighting pain, some of the first things doctors suggest are foods to combat swelling and inflammation. Arthritis, by definition, is inflammation in one or more joints. With that in mind, the following foods in particular have been shown to help combat inflammation:

Tart cherries. In addition to containing powerful cancer-fighting antioxidants, tart cherries contain cyanidin, a compound that’s been found to be better at reducing inflammation than aspirin. According to a report in the Clinical Journal of Pain, anecdotal evidence shows that eating tart cherries may relieve the pain of gout and arthritis.

Omega-3s. These fatty acids found in fish oil have been shown to reduce not only cholesterol and the risk of heart disease, but also inflammation. Numerous studies have shown that increasing intake of omega-3 fatty acids is particularly effective at lessening pain among people with rheumatoid arthritis and enabling them to decrease their use of non-steroidal inflammatory drugs (NSAIDs like ibuprofen). Experts at the Johns Hopkins Arthritis Center, however, warn against taking omega-3 fatty acids in the form of gelatin supplements, since safe and practical doses of fish oils for arthritis sufferers have yet to be determined.

The John Hopkins center suggests that consumption of fish rich in omega-3s such as salmon, herring, and mackerel is a better alternative, but even healthy people should not consume more than 3 grams daily (through either diet or supplement).

Soy. High-protein soybeans are also packed with isoflavones, powerful compounds that have been shown to slow down both inflammation and oxidation. One study, published in the journal Phytomedicine in 2004, found that study participants who ate 40 grams of soy protein a day experienced more relief from osteoarthritis symptoms than did participants consuming 40 grams of milk-derived protein. However, the beneficial effects, such as increased range of motion and improved quality of life, were found mostly among the men studied. In any case, talk with your doctor before adding soy supplements to your diet because some safety questions are still unanswered.

Turmeric. Meena Katadare, head of the Carcinogenesis and Chemoprevention Laboratory at the Weill Medical College of Cornell University says that curcumin — the active chemical in turmeric — has been used to help prevent ailments for generations in Asian countries, and recent studies show that it helps fight both inflammation and cancer. “Spices have been used for thousands of years not only to enhance food but to improve health,” Katadare told Weill’s Food and Fitness Advisor. “We are just now discovering the scientific proof of what our grandmothers knew: That spices and herbs can heal and help prevent disease.”

Sugar. One household staple, sugar, has also been shown to combat pain in a slightly different way, by triggering the release of opiates in the brain. That might explain why doctors hand out so many lollipops. Studies have found that sweet drinks can relieve pain in both babies and adults. Baby boys may even stop crying during circumcision if they have something sweet to drink.

So while cherries and fish oil might help alleviate pain, some studies suggest that other foods — ranging from milk to processed meats — can actually trigger things like migraine headaches and arthritis pain in people who are extra sensitive to them.

Clinical medicine has long recognized that severe food allergies can trigger acute asthma attacks, skin rashes, and even anaphylactic shock in children and adults. These types of allergies can usually be diagnosed through skin-prick tests and other procedures. But there is another type, often called “hidden” or “masked” food allergy, that has been the subject of controversy within the discipline for decades. These more subtle food sensitivities are extremely difficult to diagnose clinically, to the extent that some doctors doubt their existence at all.

Nevertheless, a substantial body of medical literature documents the fact that certain foods can trigger increased pain among individuals in scientific studies. According to a report in the Alternative Medicine Review, masked food allergies have been linked not only to migraines and arthritis but to asthma, irritable bowel syndrome, eczema, and rhinitis, among other ailments. Most scientific studies into masked food allergies place patients on an “elimination diet” in which participants eliminate all questionable foods from their diets for anywhere from a few days to several weeks. During this period, participants record how they are feeling when eating none of the possible trigger foods, then while adding each food one by one, noting if any one food seems to worsen their symptoms.

Avoiding certain foods has been shown to be effective in some studies for the following conditions:

Migraines. Experts tend to agree that certain foods can trigger migraines in individual sufferers. In fact, headache specialists often encourage their patients to keep headache journals so that they can become aware of their triggers, whether nutritional or environmental. According to an article in the Cleveland Clinic Journal of Medicine, foods that contain tyramine (a naturally occurring compound formed when the amino acid tyrosine breaks down) are common food triggers for migraines. These foods include bananas, avocados, aged cheeses, yogurt, sour cream, nuts, chocolate, red wine, processed meats and fish (containing nitrates), food coloring, preservatives, caffeine, alcohol, monosodium glutamate (a flavor enhancer found in Doritos and often in Chinese food), and artificial sweeteners. Other studies have found that wheat, oranges, and eggs were common triggers.

Gout. It’s also widely accepted that people who suffer from gout should avoid foods rich in purines, such as organ meats, anchovies, and dried peas and beans. Purines break down into uric acid, high blood levels of which cause gout. People with gout are also advised to avoid alcohol or drink it in moderation, since alcohol interferes with the body’s ability to remove uric acid.

Arthritis. There is less clinical evidence that sufferers of rheumatoid arthritis or osteoarthritis can benefit from eliminating certain foods from their diets. However, today some doctors cautiously admit that food sensitivities could play a role in arthritis pain for a subgroup of people who are extra sensitive to certain foods, like dairy, wheat, corn, or red meat.

Fibromyalgia. A few studies have found that eliminating certain foods, such as meat and dairy, from the diet of fibromyalgia patients can help lessen pain, but more studies need to be done. According to the National Fibromyalgia Association, symptoms of the disease are sometimes eased when refined sugar, caffeine, alcohol, fried foods, red meat, and highly processed foods are eliminated or kept to a minimum.

To be sure, the effect of diet on individuals with varying conditions is complex and confusing. For the most part, however, suffering from pain doesn’t change the basic blueprint for a healthy diet: Plenty of fruits, vegetables, and whole grains and limited amounts of sugar, salt, and saturated and trans fats. Following a healthy diet may not erase pain, but you’re still bound to feel better, aches and all.

Ahmed, S. et al. Biological basis for the use of botanicals in osteoarthritis and rheumatoid arthritis: a review. Evidence-Based Complementary and Alternative Medicine. Sep 2005: 2(3); 301-308.

Arthritis Foundation. Diet and your arthritis. A look at the research. 2006. http://www.arthritis.org/resources/Nutrition/diet.asp

Hafstrom I, et al. A vegan diet free of gluten improves the signs and symptoms of rheumatoid arthritis: the effects on arthritis correlate with a reduction in antibodies to food antigens. Rheumatology (Oxford) (10); 1175-1179.

Weill Medical College of Cornell University Food and Fitness Advisor. The Spice of Life: Cooking with herbs and spices not only livens up your meals, but may also help prevent disease. 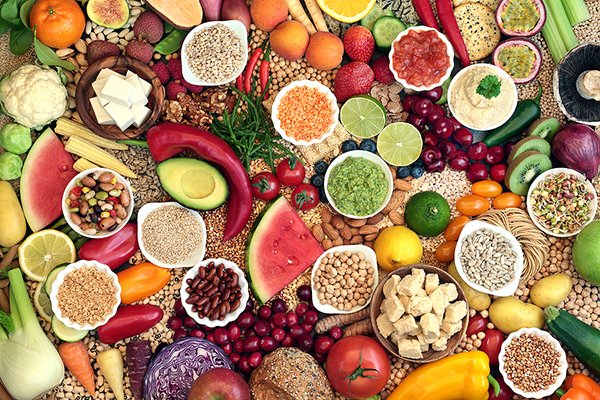