Yoga may help people soothe frayed nerves during the coronavirus pandemic, but the ancient practice may also help those with more serious, chronic forms of anxiety, new research suggests.

When the researchers followed up six months later, CBT was the most effective treatment of the three. The effects from yoga and stress education had leveled off after six months.

Yoga may help people soothe frayed nerves during the coronavirus pandemic, but the ancient practice may also help those with more serious, chronic forms of anxiety, new research suggests.

When the researchers followed up six months later, CBT was the most effective treatment of the three. The effects from yoga and stress education had leveled off after six months.

“Generalized anxiety disorder is a chronic, impairing condition that’s undertreated. Many people don’t seek or can’t access care, so while there are effective treatments available, we need more options for people to overcome barriers to care,” said study author Dr. Naomi Simon. She’s a professor in the department of psychiatry at NYU Langone Health, in New York City.

“For people who may not be able to access the gold standard — cognitive behavioral therapy — yoga is another option. It carries little risk; it’s accessible; and it has at least a short-term effect on anxiety,” she added.

Cognitive behavioral therapy is a form of psychological therapy. It’s designed to help people identify and change negative ways of thinking, according to the American Psychological Association.

The study used a type of yoga known as Kundalini. Simon said this type of yoga involves three components: exercise (posing); a concentration on breathing; and a mindfulness or meditative component. She said other types of yoga that rely on these components would likely be similarly helpful.

The stress management treatment was a class that provided education about health and wellness topics, Simon noted.

The study included more than 225 volunteers with generalized anxiety disorder. Their average age was 33 and about 30% were male.

The volunteers were randomly placed into one of the three treatment groups: Kundalini yoga; CBT; or stress education.

After 12 weeks of treatment, the researchers found that yoga and CBT bested stress education. But yoga wasn’t quite as effective at easing anxiety as CBT. At a six-month follow-up, CBT was clearly more effective than the other treatments. By this point, yoga and stress education showed similar levels of effectiveness in treating anxiety.

“This study is very timely in the era of COVID. It’s important that we have treatment options, and we found some evidence that yoga has short-term effects for decreasing anxiety,” Simon said.

While the researchers didn’t look at the effects of doing these treatments via telehealth or if someone did yoga on their own at home, Simon said she thinks yoga is “worth trying because it wouldn’t be harmful,” and if someone is having trouble accessing care due to the pandemic, it at least gives them an option for reducing their anxiety.

But she said to try yoga that focuses on the three components, and she recommended that people don’t worry much about achieving “perfect poses.” She said if you’re interested in trying yoga to ease your anxiety, it’s important to commit to doing it regularly. Simon suggested at least 20 minutes a day.

Dr. Manuela Kogon, an internal medicine doctor and a clinical associate professor of psychiatry and behavioral sciences at the Stanford University Center for Integrative Medicine, was excited by the findings.

“CBT is superior and has lasting effects. It changes your thinking around worry. Yoga affects you as you do it, so it doesn’t change your thinking permanently. This study was a beautiful documentation of how yoga affects the body,” Kogon said.

Kogon agreed that other types of yoga would likely have the same anxiety-reducing effect in the short-term as long as it used the three components. It probably doesn’t need to be yoga, either. Kogon suspects that tai chi and qi gong — which also incorporate a physical exercise component, a focus on breathing and meditation or mindfulness — would help.

“Anything that gives your body so much to do that the brain isn’t capable of creating worrisome thoughts could work. People who are anxious worry a lot. If you stand on one foot and breathe and concentrate on your foot, you don’t have time to think worrisome thoughts. It’s not so much the yoga itself, it’s anything that engages you deeply enough to minimize negative thoughts,” Kogon said.

The study was published online Aug. 12 in JAMA Psychiatry. 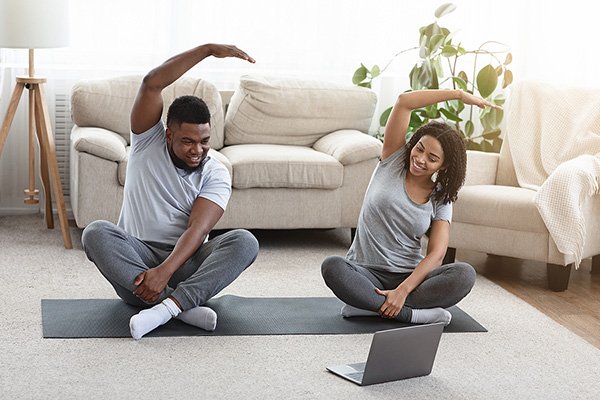