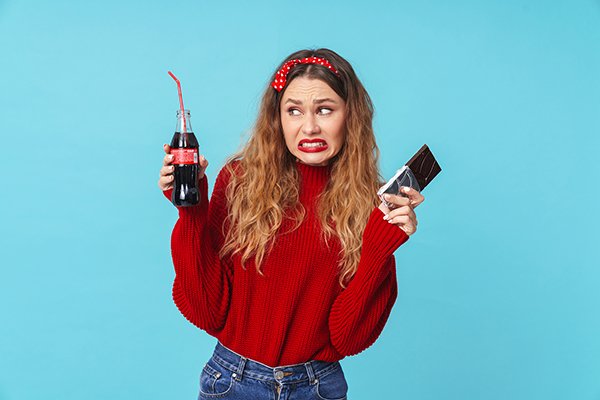 It’s no secret that too much sugar and saturated fat aren’t good for you, but what food combos put you at greater risk for heart disease and death in middle age?

The answer, from a new University of Oxford study, is likely to disappoint a lot of folks.

Researchers found that diets heavy in chocolate and pastries, butter, table sugar, sodas and fruit juices — and low in fresh fruit and veggies — are the worst. Also risky, though less so, are diets high in sugary drinks, chocolate and candy, table sugar and preserves — even when those diets were lower in foods like butter and cheese, which are high in saturated fat.

“There’s a lot of research and evidence on single nutrients — the problem with that is that people do not eat nutrients, we eat food, combinations of food,” said senior author Carmen Piernas, a research lecturer in primary care health sciences. “So telling people that they need to reduce their sugar intake is very confusing, and it may not be the right message.”

So her team decided to look at diet and health outcomes not in terms of specific nutrients to limit — but specific foods.

Participants self-reported their diets between two and five times. Researchers identified the food groups and nutrients. Hospital and death registry records were used to calculate rates of heart disease and death.

Participants were grouped by the foods they ate. Those people whose diets were heavy in chocolate, candy, butter and white bread had a 40% higher risk of heart disease and 37% higher risk of early death, Piernas said.

Those in the sugary beverage group had a 14% higher risk of heart disease and 11% higher risk of death, though Piernas said the links were less clear than in the other group. The study only found associations rather than a cause-and-effect link.

“Perhaps the importance of this study is to stop talking about sugar and fat and start talking about chocolate, confectionary [candy], white bread, butter, high-fat cheese,” Piernas said. “That’s what we need to tell people. If they have a diet which is high in these things and low in fruits and vegetables,” they are more likely to develop heart disease and die early.

Here’s why: “Primarily, these bad diets make them gain weight,” putting them at risk of heart disease.

This study involved people from Britain, so the findings might differ in other parts of the world, Piernas said.

Participants whose diets were higher in chocolate, candy, butter and white bread were more likely to be younger males who smoked. Compared to people whose diets did not include these foods in large quantities, they also tended to be less active, obese and have high blood pressure.

Those who favored a diet high in sweetened drinks and preserves had a higher risk for heart disease and death even though they were more active and less likely to smoke, be obese or have high blood pressure, diabetes or high cholesterol, the study found.

Other foods that have been touted as less healthy — such as breaded fried fish, savory snacks and processed and red meats — also appear in this study but contributed to a lesser degree, Piernas said.

The data comes from 24-hour assessments and may not be representative of participants’ lifetime eating habits, researchers said. Future research could probe the potential reasons for the links.

The findings were published online April 21 in BMC Medicine.

Whitney Linsenmeyer, a spokeswoman for the Academy of Nutrition and Dietetics, reviewed the findings.

“A diet high in refined carbohydrate with the white bread, high in saturated fat, high in added sugar, it does hit all of those red flags that are very well supported by research,” she said.

It can be scary for people to think about specific foods in terms of poor health outcomes or even death, said Linsenmeyer, who is also an assistant professor of nutrition and dietetics at Saint Louis University in Missouri.

“I think it’s much more important to emphasize that all of these foods can certainly fit into a healthy dietary pattern,” she said. “We don’t have to avoid them entirely, but we also don’t want our diets to be high in these things. Moderation is kind of a trope of dietitians, but it’s the real deal.”

“To me a healthy diet also incorporates a healthy mindset and a relationship with food where we can enjoy some of these indulgences and not feel guilty about it,” Linsenmeyer said.